We comply with the requirements for clean labelling by using all-natural, non-GMO raw materials and a gentle fermentation process without any additives.

FODMAP is the abbreviation for “fermentable oligo-, di-, monosaccharides and polyols”. It is a group of carbohydrates and sugar alcohols that are found in many foods and are poorly absorbed in the small intestine. This group includes fructose (monosaccharide), lactose (disaccharide), fructans, galacto-oligosaccharides (oligosaccharides), sorbitol and mannitol (polyols).

In a clinical study published in 2010, a positive effect of a low-FODMAP diet on the symptoms of functional intestinal diseases, e.g. B. irritable bowel syndrome.

Direct dough management means that all ingredients end up in the dough bowl at the same time. The dough is kneaded and there are no further work steps until the shaping – apart from the possible folding of the dough. Ideally the dough develops into a highly aromatic bread with very little yeast. This long cooking is usually done in the refrigerator for 12-48 hours. But can also take place at room temperature – with even less yeast.

With the indirect route of dough management, there are one or even several one or more bread preliminary stages. Especially doughs that ferment with little yeast overnight before the main dough is made bring great flavors and keep it fresh for a long time. But the swelling of shot, grains & Co. is also one of the preliminary stages.

The glycemic index (GI) is a ranking of carbohydrates on a scale from 0 to 100 according to the extent to which they raise blood sugar levels after eating. Foods with a high GI are those which are rapidly digested and absorbed and result in marked fluctuations in blood sugar levels. Low-GI foods, by virtue of their slow digestion and absorption, produce gradual rises in blood sugar and insulin levels, and have proven benefits for health. Low GI diets have been shown to improve both glucose and lipid levels in people with diabetes (type 1 and type 2). They have benefits for weight control because they help control appetite and delay hunger. Low GI diets also reduce insulin levels and insulin resistance.

Recent studies from Harvard School of Public Health indicate that the risks of diseases such as type 2 diabetes and coronary heart disease are strongly related to the GI of the overall diet. In 1999, the World Health Organization (WHO) and Food and Agriculture Organization (FAO) recommended that people in industrialized countries base their diets on low-GI foods in order to prevent the most common diseases of affluence, such as coronary heart disease, diabetes and obesity. (Source: University of Sydney)

The industrial process for producing bread changes constantly.  The greater the quantity of mother dough, the less salt is required because mother dough is an E number-free flavour enhancer that contains no salt. A mother dough mixer is a industrial system that makes it possible to prepare bread in the traditional manner.

The sponge and dough method is a two-step bread making process: in the first step a sponge is made and allowed to ferment for a period of time, and in the second step the sponge is added to the final dough’s ingredients, creating the total formula. In this usage, synonyms for sponge are yeast starter or yeast pre-ferment.In French baking the sponge and dough method is known as levain-levure. The method is reminiscent of the sourdough or levain methods; however, the sponge is made from all fresh ingredients prior to being used in the final dough. (Source: Wikipedia)

The term “paleo” is the short form for the period of the Paleolithic, also known as the “Stone Age diet”. The “Paleo Diet” is based on the original diet of hunters and gatherers, imitates them with the foods available today and places an increased focus on high food quality and sustainability. The basis of the Paleo diet is formed by foods that were available in a similar form during the approximately 2.5 million year-long evolution of the “human” species and that offer an ideal nutrient supply for our organism.

Instead of a dogmatic orientation on the “Stone Age”, most Paleo diets rely on modern scientific knowledge with the Paleo diet to find the best long-term individual nutrition for humans. Paleo includes all unprocessed and nutrient-rich foods in the form of vegetables, fruit, nuts & seeds, eggs, healthy fats, meat and fish. 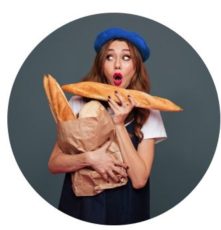